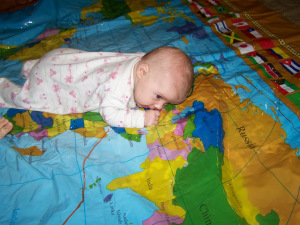 The Lord has been challenging me. Let the Lord challenge you.

Some of you who are older than I am probably have a better grasp on the concept of generational inheritance, but for my generation and those younger than me, by and large we are completely clueless. In this age of instant gratification, where everything revolves around the kingdom of self and people exist to serve the ever demanding me, we have completely lost sight of what it means to build a foundation that will last throughout generations. Even for those of us who strive against the current of the culture, it is so difficult to think in terms of inheritance and legacy, unless we’re talking about our inheritance and the legacy that’s passed down to us.

Whether you love them, hate them, think they are selfish and greedy or are completely indifferent, the wealthy have a concept that many others don’t. They understand the concept of a generational vision. The extremely wealthy build wealth in a way to pass down to their children. They teach their children to build that wealth to a greater level and pass it down to their children. They don’t just develop “New Years Resolutions”. They plan our their lives with a generational vision. They write things legally for their bloodline for hundreds of years. They focus on not letting what they have built disintegrate. They don’t just gain that wealth for themselves. They guard it and grow it in such a way as to leave an inheritance for their great-great grandchildren.

You and I may never attain to that level of monetary wealth, but we have the exact same opportunity to pass on an inheritance to future generations – a spiritual inheritance.

Another group of people who really understood this concept was the Pilgrims. The Pilgrims didn’t come to America for a better life for themselves. They came to America knowing that it would be hard and many of them would die. They came for their children and grandchildren. They came for future generations. They were willing to make the sacrifices necessary so that future generations would have a better hope. Most of them never got to really enjoy the fruit of their sacrifice, but we enjoy it today.

Most of the Pilgrim women who came to America in that first group died. In fact, only one of them actually survived. However, most of the children lived. Why? Aren’t children the most vulnerable to disease and sickness? The women would sleep on their children to keep them warm. They saved their children’s lives. In the act of doing so, almost all of the women died. That is a generational vision. That is so incredibly counter cultural in our world and in the church at large right now, where many don’t even want to serve in children’s ministry for fear that they won’t be “fed” enough. Who is willing to be a covering for the children in such a way as to sacrifice their own “promised land” for the promised land of future generations? I believe you are, and that is why you are here.

The “Heroes of Faith” in Hebrews 11 never received the promises for themselves. Those promises were for future generations – for a generational vision.

These all died in faith, not having received the promises, but having seen them afar off were assured of them, embraced them and confessed that they were strangers and pilgrims on the earth. Hebrews 11:13

Abraham only saw the mere first fruit of a bud on a vine of the great promise God gave to him. He never saw descendants as numerous as the stars in the sky or as the sand on the sea shore. God gave Him a promise and he never saw it. That promise wasn’t for Abraham to cling to as his own personal “promised land”. It was a generational promise that had generational fulfillment. It was a marathon promise.

We do what we call Family Altar time several times a week. This is where we either pray or worship with our children. During prayer time, each child takes a turn choosing something off of a prayer wall to pray for. That child then says their prayer. Then we all sing the prayer together. We have 3 prayer walls and 6 children, so that’s 18 prayers we say or sing each prayer time. Sounds wonderful doesn’t it? Ideal. In reality, sometimes it is. Sometimes things go very smoothly. Sometimes we even feel some kind of anointing and sense of His presence. Sometimes.

And then there are those other times when at least one of the 6 children is crying about something. They want to sit in a place that’s already taken or someone is sitting a little too close to them for their comfort. There are times when a few of them are overly tired and cranky. There are many times when our prayer time sounds like this: “Millie what do you want to pray for? Kiah stop that. Don’t stand on the couch like that. Joel, quiet. Listen. Hunter, you are okay. You are okay. Shhhh… What did you say Millie? Who heard what Millie prayed?”

Many times I am tired.

Many times, especially on the nights when my husband is not there to help me, I’d rather just skip it and let them play or watch a movie and put them to bed.

Why do I keep doing it?

Not for me. For them? Yes, but it’s more than that. For the Lord? For sure, but I also know that God is very gracious. I know that this is not in the realm of commandment or expectation, but rather invitation.

I’m doing this for GENERATIONS of Hanks’ children.

I have a generational vision that’s bigger than “I don’t feel like it tonight.”

God really cares about generations and generational vision. Deut. 4:9 says ” Only be careful, and watch yourselves closely so that you do not forget the things your eyes have seen or let them fade from your heart as long as you live. Teach them to your children and to their children after them.”  What God did for the generation He led out of Egypt – the breakthrough, the promises- it wasn’t just for that generation. God wanted it to be passed on from generation to generation.  Isaiah 41:4 says “Who has performed and done it, Calling the generations from the beginning? ‘I, the Lord, am the first; And with the last I am He.’”

When God called you to Himself, He didn’t just call you. He called generations. Whether you are the first believer in your family heritage or whether you have taken a baton handed down from your own parents, that calling was not for you to keep to yourself. It was to be passed on to the next generation and then from there to future generations. The primary vehicle for passing that baton is from parents to children, but there are also plenty of Scriptural examples of people passing that baton on to future generations that are not related. (Often in cooperation with those who are related. For instance Eli played an important role in passing on a spiritual heritage to Samuel in cooperation with Hannah. Paul helped pass a spiritual baton to the younger Timothy, who also received a spiritual heritage from his mother and grandmother.)

I want to challenge you first to develop or solidify a generational vision for your own family. What do you want your great great grandchildren’s walk with God to look like? If the Lord tarries, what are your hopes and dreams for your family’s generational legacy? What can you do now to begin to walk towards that goal?

*This article was salvaged from our previous website. We now have 8 children and are still going strong, building a foundation to last for generations.

Young and Old – Ushering in His Presence