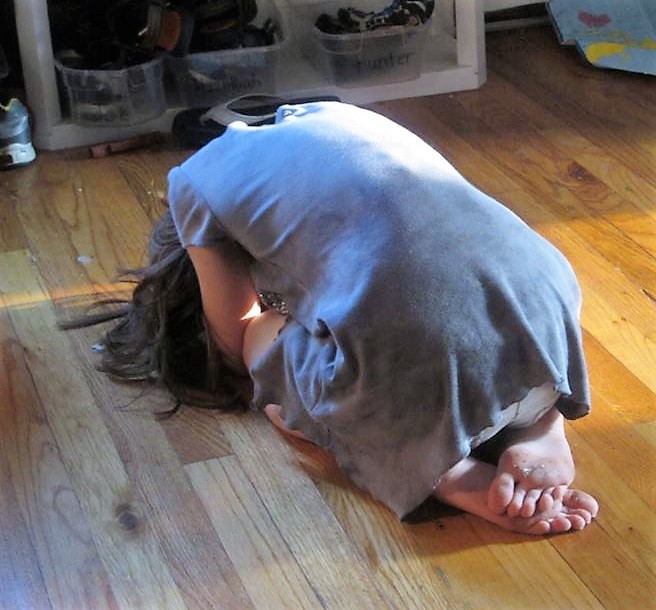 Prayer caves weren’t my original idea (We have the Children’s Equipping Center to thank for that one!), but I have used them in my own and in children’s ministry for over a decade.

Prayer caves is a simple tool to help young children shut out the distractions around them and focus on hearing the voice of God. We do It without fanfare and without excess explanation. We simply believe that God wants to speak to them, and He will. And when we believe it, they believe it. And they hear from Him when no one teaches them to doubt.

I often explain that a good friend both talks and listens. God is a good friend to us. He listens to us when we pray to Him and He loves to hear our voices. He also has a lot He wants to say to us and we want to be good friends to Him too, listening to what He has to say.

We get in tornado drill position – now renamed prayer caves position – and get quiet. How long we stay there depends on the age of the child and whether this is their first time trying or their fiftieth time listening. Each time we stretch it for just a little longer.

Sometimes I anoint the children with oil first. I ask them to repeat a prayer or two after me as we begin.

Holy Spirit, open up my ears so I can hear You.

Jesus, touch my heart with Your love.

Father, what do You think about me?

After our time of listening I ask the children “What did you hear?” , “What did Holy Spirit show you?”, or (as Bill Johnson says) “If Jesus were to walk into the room right now, what do you think He’d say?”

Everyone, no matter their age, has to LEARN to hear the voice of God. There is no shame in making mistakes while learning something. We all stumble while learning to walk and the Father is delighted in the process! So, is it messy? Sure! And that’s okay!

There are three main responses to what the children say:

This must be CONFRONTED in LOVE. With a smile, you can say “Actually, the Bible says _____________. Thanks for trying!” We do not want to shut the child down and cause them to not want to try again to listen to the voice of the Lord, but we do want present to truth of Scripture.

2.The child says something goofy in an attempt to get attention.

This attempt should be ignored whenever possible. Just say “Okay” and move on to the next hand raised.

3. The child says something that lines up with the Word of God and the nature and character of God.

This should be affirmed with excitement. I often say “Yes! This sounds like my Jesus!” Or I will point out where in Scripture it lines up with His Word. I will tell her that I feel encouraged and thank her for sharing.

The truths that children share in their prayer caves may sound so simple to us. They don’t seem to be earth shattering revelations. They are often truths such as:

“God told me that He loves me.”

“God said He is taking care of me.”

As simple as these truths may seem, they are foundational and imperative to hear from the mouth of God.

We can tell children all day long that God loves them. We can sing it in songs and pray it over them at night. And they can know it at a head level. But what does it take for that truth to get to a heart level?

It takes the voice of the Lord.

When the Holy Spirit whispers that love to their hearts, it changes everything. They are transformed.

My daughter Hosanna used to be terrified of storms. We tried to talk her out of the fear. We prayed with her. But she remained petrified. One day during prayer cave time in children’s ministry, she popped up and said that Jesus told her not to be afraid of storms.

We could have questioned that this was truly the Lord because at this time ALL of the preschool children were saying the same thing. They all said Jesus told them not to be afraid of storms. They were just copying off of each other, right? They weren’t really hearing from God, were they?

Only from that moment forward, Hosanna never feared a storm again. Not once.

The winds could be battering the windows, lightning flashing, tornado sirens going off, and Hosanna would be completely at peace. To this day, she is the one with the most peace in the middle of every storm. Why? Because the voice of the Lord changes everything.

You are never too young to pursue deep friendship with God: talking and listening. Prayer caves help children to learn to listen for His voice and to begin a lifelong adventure with the Holy Spirit.

Check out this video about prayer caves.

Interceding for your children through art

Moments with Jesus Encounter Bible – Get it NOW!

Praying for the Seven Mountains of Influence